Archive for the tag “Gordon” 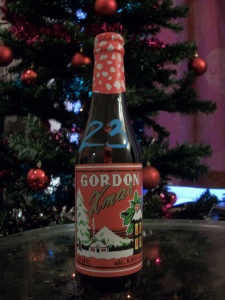 Interesting one this. Gordon Xmas isn’t the most Belgian of names. No surprise, Anthony Martin isn’t a Belgian brewery; however this Belgian style beer was brewed for a British company in Benelux, an economic union area of Belgium, the Netherlands and Luxembourg.   A belgian style strong ale, brewed for a British company, in an area defined by economics as the province of three European countries.

The nose is great, very obvious and blatant; a very pure bonfire toffee that’s very sweet and smoky. You can smell the charcoal too, like its a home-made version of the sweet eaten as you breathe in the fumes from the bonfire. Its a cliché but its a very sugar and spice smell.

Ale to the King has seen this before in similar kinds of beers, a foretaste that’s hard to describe as anything other than coca-cola. The drinker wants to search harder but what’s obvious is obvious; its a matter that comes down to how it doesn’t dance across the tongue. Now usually this is an admirable trait in a beer, but here the fact it doesn’t work that way. In fact it works in its favour; the flavours come very clear and what’s more intriguing is that its a beer you can hold at various stages of taste. Even more so that its a strong beer at 8.8%; the yeast doesn’t fizz along your tongue yet its powerful stuff.

On the mid-taste, which you can hold in that stage for much longer than the fore-taste by perhaps sheer viscosity, and it is a very viscous beer, there’s clear spiced nuts. But its also got an elusive something extra which Ale to the King can only put down as a little dried apricot.

The after-taste is way easier to detect; in fact it practically shouts at you; dry almonds in a sticky sweet, viscous texture form. It holds your mouth such is its thickness and lingers with great sweetness.

The colour is a nicely tempting dark bronze while the head a quickly dissipating creamy white. This is a fine beer and Ale to the King would recommend it to absolutely everyone.