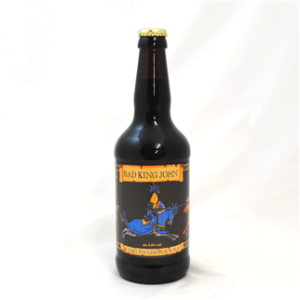 Ale to the King’s first review since Aledvent Calendbeer goes back to its English roots with Bad King John by Ridgeway Brewing. I was first attracted to this one because of the lovely old, old, old fashioned label modelled after the Bayeux Tapestry.

This is a beer that will confound your expectations. When pouring you’re confronted with an impenetrable wall of blackness by the beers colouring; honestly, its pitch black. The head, however, is surprisingly light for a beer of this colour, there is very little of it however and it doesn’t hang around for long.  Its also a very sticky beer that leaves very definite legs (if a wine term can be appropriated) that do, by contrast, hang around.

The nose is pretty malty and has the sweetness that comes with that giving a definite flavour of golden syrup and coca cola.

On the first sip however it has a very light taste, strangely so and quite oddly fruity, bringing to mind fresh apricots. The mid-taste subtly switches, however, to an opposite taste. Its roasted, almost burt, like a very well done roast chicken covered in the requisite and traditional herbs.

The after-taste is another roasted taste, but from a totally different, famously roasted item, that of rich, high quality coffee. Its really delicious and the viscosity of the beer really makes this not only cling to your mouth but is so thick it actually seems like its pushing it into the walls of your maw.

There’s a slight fizz showing not a great deal of yeast at work but this is a very nice beer, if not excellent, but the complexity and subtly are stand out qualities, especially in a stout.