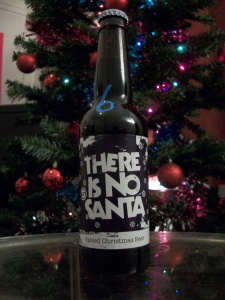 Everyone is getting into the festive spirit already, but we’re still some way off yet. That’s a bit of an unfestive attitude, but then that’s probably because today’s Aledvent Calendbeer is There is No Santa from Brewdog.

The nose is fantastic and offers up a wealth of flavours that, obviously, have been crafted to smell Christmassy. There’s a punchy aroma of spices, distinct cinnamon, orange zest and red wine which has clearly been engineered to deliberately smell like mulled wine. It certainly delivers, but the sweetness and spices combined with a certain sticky smell equally give off the scent of moist Christmas cake.

When you taste it there’s a moderate fizz but it lasts a remarkably long time to begin with and crackles all the way through the sip and along the tongue. I’m not sure if this extended fizz has anything to do with the following but the taste is less rewarding than the nose. They’ve clearly ploughed so many Christmassy things into the beer its like the brew has got some kind of personality disorder. The taste is really messy and undefined. Its not that bad, but its not that good. Its a damn sight more interesting that the likes of John Smith’s or Stones but the flavours become muddy; a case of too many chefs.

There’s certainly some white chocolate (at the cheaper end of the spectrum) in there and you do get the standard stout after-taste of licorice, albeit a little sweeter than one would expect. The spices and ginger (the latter of which doesn’t register) included in the recipe renders this a much more saccharine stout. Stout usually has a rather dark, heavy taste, whereas this is quite light, and to be fair does have a rather fun quality due to the fizz and sugar. In fact, it manifests as flat cola if anything, all the way through to the licorice with a hint of spiced cider in the midtaste.

You’ve got to work hard to find the flavours though, and drinking fine ale should never be hard work. To find the nuggets of gold you’re going to have to dig through quite a bit of murkiness and that’s a shame given its a Brewdog beer.

So in that regard, it rather suites its name.

One thought on “Review: There is No Santa – Aledvent Calendbeer 6”